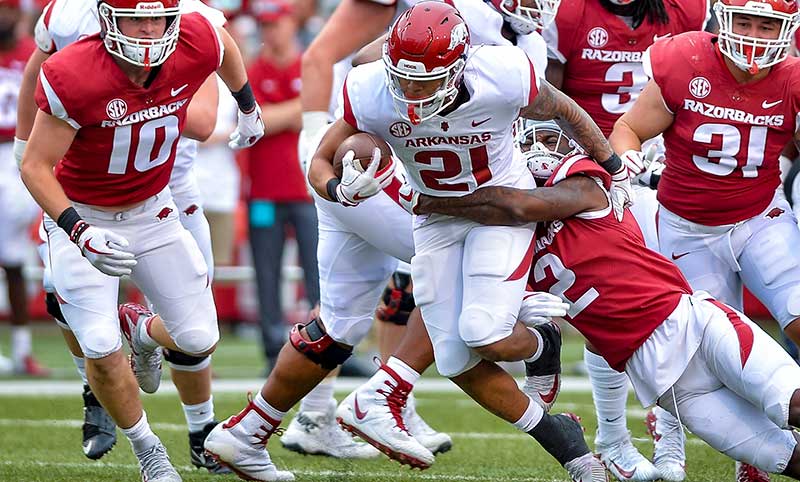 FAYETTEVILLE - The Catalons moved along spectacularly Wednesday on both sides of the ball during Arkansas’ practice.

It marked the Razorbacks’ fifth preseason practice and their first in full pads.

True freshman safety Jalen Catalon of Mansfield, Texas, signed by Chad Morris’ Razorbacks despite missing his 2018 high school senior season with an injury, reportedly intercepted a pass Wednesday for a touchdown to go with the pick-six he returned in Monday’s practice while gleefully pursued by celebrating defensive coordinator John Chavis.

“We threw a deep ball to Kendall Catalon, and he scored on it” Arkansas senior receiver Deon Stewart said after practice. “KJ (Jefferson, the freshman quarterback) did.”

Morris awarded the defense the daily belt for the unit (offense or defense) practiced better overall.

DB’s TO THE FRONT

Sophomore Joe Foucha, closing spring drills and starting preseason as a first-team safety along with junior returning starter Kamren Curl, said first-team cornerbacks Jarques McClellion, a starter last year, and Montaric “Buster” Brown, a third-year sophomore from Ashdown moved in the spring from safety to corner, have come to the front for their part of the defense’s back end.

Since after spring ball, junior first-team nickel D’Vone “Pluck” McClure was moved to weak side linebacker. Morris and Chavis have been publicly hesitant to declare January-enrolled true freshman Greg Brooks as the starting nickel.

But there’s no “maybe” about Brooks, says Foucha.

“I wouldn’t say maybe because he has been ballin’,” Foucha said. “He has been ballin’ since the day he got here, and he’s doing even better. He is jumping routes. He is definitely going to be a guy who can do something this year.”

So it’s noteworthy when Agim praises an offensive lineman as the agile 294-pounder Wednesday praised Shane Clenin, the  6-6, 302 third-year sophomore and possible starter at right guard.

“Obviously he’s a really good player,” Clenin said, noting offensive line coach Dustin Fry’s desire to work his guards against Agim. “Coach Fry always says it’s kind of like iron sharpening iron. He (Agim) gets the better of me sometimes, and I get the better of him sometimes. It’s been good for us to bring the best out of each other.

“It’s something I’ve had to focus on,” Clenin said. ”Sosa, he’s a big finesse guy. He has really good speed and skill for how big he is. So you really have to step up your technique levels or he’s going to capitalize on that.”

Hicks was first-team after spring drills, but Morris has August operated with a clean slate regarding the season-opening QB  starter Aug. 31 against Portland State.