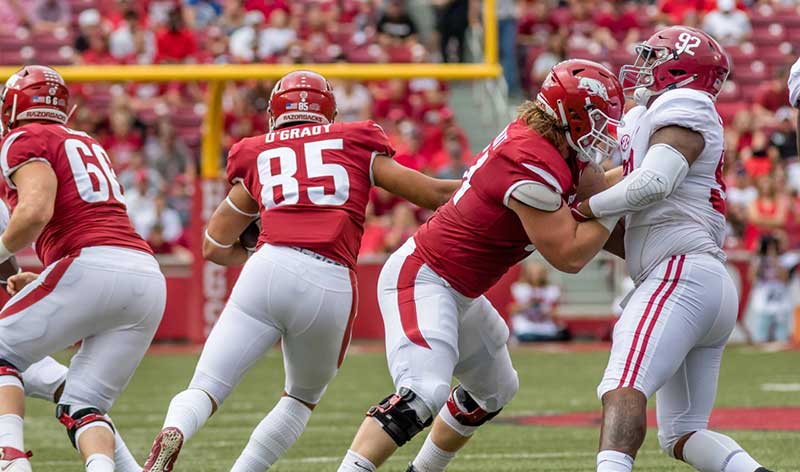 But not necessarily, not if he's Cheyenne (also known as C.J.) O’Grady (in Craven Whitlow photo), the fifth-year senior tight end from Fayetteville. O’Grady opened the past four years with coaching staffs trying to coax him to reach his vast potential.

For even with O’Grady’s 30 catches, including six touchdowns, leading the Razorbacks last year and his 400 receiving yards second on the team, O’Grady did not work  first-team for all of Tuesday morning’s practice in pads.

Arkansas coach Chad Morris, trying to harness Fayetteville High grad O’Grady’s (6-4, 256) size and speed as Bret Bielema’s regime tried in 2016 and 2017, has worked O’Grady some among the reserves so far this season.

“I think we’ve got some competition in that room,” Morris said after Tuesday’s practice. “I think it’s iron sharpens iron. You know we’ve got a standard that we’ve set. You do that and you’ll be running with the group you want to run with. If not, we’ll let you run with the other groups. That’s kind of where we are with C.J.”

Morris called O’Grady a senior who needs to decide “what he wants to do.”

“Our standard is not going to change,” Morris said. “He’s one of the best football players in the country, and we’re going to treat him that way. So we’re going to see how he responds.”

How has he responded so far?

“Well, he's working a little bit with the third unit right now,” Morris said. “So, we'll see. He's getting some first unit, too. He'll respond. He always does. He's done it the last couple of days.”

Conditions, successively practicing Monday and Tuesday with the thermometer in the 90s instead of low 80s, got tougher.

His Hogs toughened with them, Morris said.

“We got some heat on us today, which was good,” Morris said. “We needed that. You hear guys out there encouraging to push through. We have purposely tried to strain these guys in some tough situations. We had some situational awareness things today we had to hit. I really love this football team’s energy level and enthusiasm.”

Morris sees a defense that ran ahead of the offense in the spring still ahead in August.

“Defensively, we are playing at a speed we haven’t seen since we have been here,” Morris said. “That is a credit to some depth we have in our D-line. In the back end, I have been extremely impressed with (cornerback) Buster Brown and (safety) Kam Curl, two guys who have really caught our attention, and (safety) Joe Foucha is another one who is really coming on. I have been really pleased with how well our defense has looked.”

True freshman safety/nickel back Jalen Catalon has made a four-day splash, particularly with his pick-six in Monday’s practice highlighted by 62-year-old defensive coordinator John “Chief” Chavis in gleeful celebratory pursuit all the way to the end zone.

“I don’t know if you saw the video, but he did outrun Chief,” Morris said laughing. “Jalen’s back there listening to Kam and Joe (upperclassmen Curl and Foucha), and then he gets in there and gets his moment and makes a play. That’s what you do.”