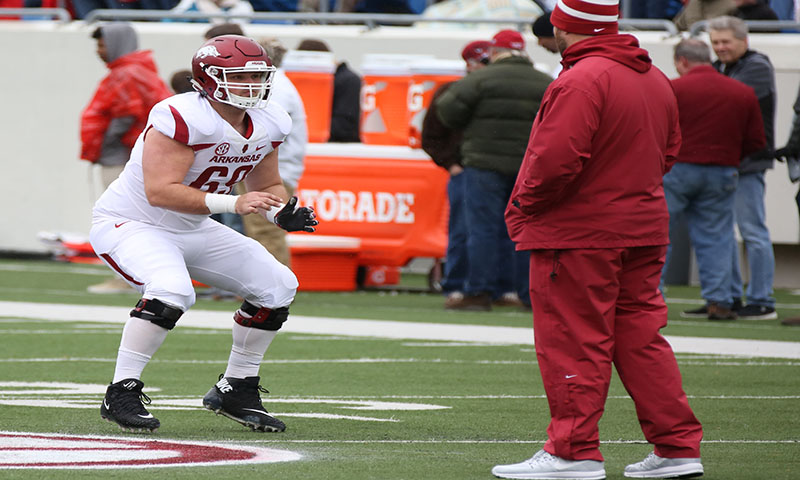 Hays played offensive guard and defensive tackle at Little Rock Christian and redshirted on Arkansas’ offensive line in 2016 before lettering for 10 games last year as a reserve noseguard.

So if he starts the Sept. 1 opener at center against Eastern Illinois, it will make the first time including high school and junior high that he’s played center in a game that counts.

“I’m not nervous about being out there,” Hays said, noting he’s flanked by experienced senior guards.  “I’ve got Hjalte (Froholdt) on my left, then got J-Gib (Dumas native Johnny Gibson) on my right. I mean, I know I’m going to be fine out there. I just have to get those snaps. Just being fluid with it. Once you start thinking about it too much, that just gets in your head and you can’t be bogged down with all that stuff.”

Hays wore a green jersey Monday, keeping him from contact during the third preseason practice.

“I’m good,” Hays said. “Just getting through some stuff, but I’ll be fine.”

“They were doing good,” Hays said of the understudies. “We were having a little trouble with the wet ball. The first time we’ve done it (a wet ball drill) since spring, so that’s going to happen. But they were out there blocking very good and staying heavy through their blocks.”

“Colton Jackson is still here among the 110 (the maximum preseason practice roster), and he’s coaching Dalton up on everything,” Hays said. “I know Dalton is going to work hard and we all know he can do it. We have a lot of camp left and there’s stuff we all have to improve on.  We all know he’s improving and he’s going to be a good player.”

2-DEEP ROSTER
The first-team defense, as seen early during Monday's practice, included ends McTelvin “Sosa” Agim of Hope and Randy Ramsey, tackles T.J. Smith and Armon Watts, inside linebackers De’Jon “Scoota” Harris and Dre Greenlaw, Hayden Henry as a Sam outside linebacker interchanged with nickel back and D’Von McClure and a secondary of cornerbacks Ryan Pulley and Chevin Calloway and safeties Santos Ramirez and Kamren Curl.

“I’m feeling a lot better,” Tutt said, crediting strength coach Trumain Carroll and cornerbacks coach Mark Smith. “Working with Coach Tru, Mark, he’s helping me with transitioning my hips, getting back good. I don’t even have any knee problems, so I’m looking forward to playing this fall.”