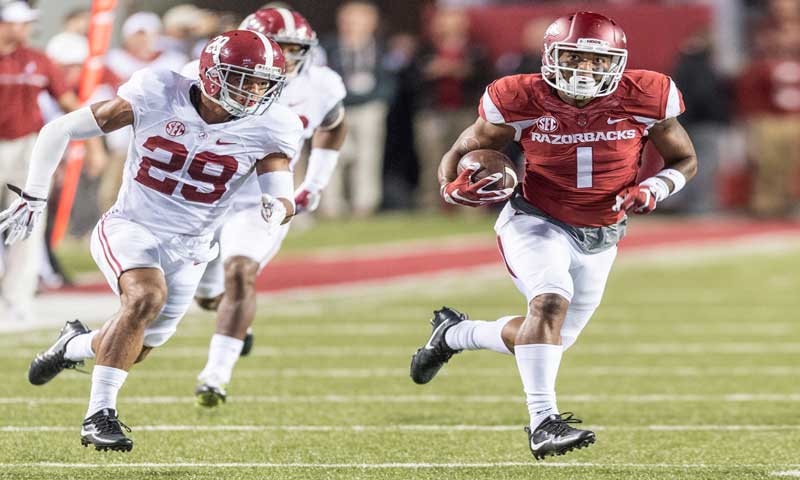 FAYETTEVILLE - In their second practice before meeting the media Saturday, the Arkansas Razorbacks worked again in non-contact helmets and shorts. They will add shoulder pads Monday after a day of meetings Sunday.

“These guys were ready to practice this morning,” head coach Chad Morris said. “It was a quick turn, so it was going to be kind of a test for them coming off a long practice Friday. They had meetings early this morning, started at 8 o'clock. But those guys showed up with a lot of energy, a lot of excitement. I thought we had a really good day. I thought we finished better today than we did yesterday. Not that yesterday was bad.”

“I was glad we had Dorian out there,” Morris said. “It was good to see him getting in the flow of things. He had a lot on him today, but I thought he moved around well.”

FILLING HOLES
Morris addressed filling two major holes created by the injury absences of senior nickel back Kevin Richardson of Jacksonville (broken foot), and junior left offensive tackle Colton Jackson of Conway. Jackson remains on the roster so he can observe the new offense, but he's also likely out until midseason after back surgery two weeks ago.

"Noah Gatlin is a freshman who is excited to be out there," Morris said. "He’s really working hard. He got some reps in there today with both our ones and our twos. And you’ll see Silas Robinson (a true freshman from Yoakum, Texas) working a little bit of center. These are two young guys we’re excited about who are going to provide some depth for us.”

As for nickel/strongside linebacker, Morris said, “Obviously, with K-Rich being out right now, we've seen Hayden get in there. Hayden has done a good job with it. He's also trying to get some Will backer. D'Vone McClure is moving around, running well, tracking to the ball. Derrick (Munson) is doing some good things. Unfortunately, last spring he was unable to play in the spring game because he had an ankle injury. He had a good spring up to that point. He's picked up where he's left off.”

Then Morris threw Foucha’s helmet in the ring. “The guy that's really, really impressive right now is Joe Foucha,” Morris said. "This  young man looks the part. The moment isn't too big for him right now.”

“I like Hayden,” Greenlaw said. “He’s a missile. He’s a guy, who from the snap of the ball to the end, is going to track the ball down.”

“I feel like it’s been forever since I’ve been full speed 100 percent through a full practice,” Cornelius said. “I can't put into words how excited I am. Nine month's ago I thought I had played my last game as a Razorback, but I got another chance to come along with this staff and this team again. It's amazing. I can't tell you how excited I am for the season.”

Especially in this Spread that he presumes will maximize his trimmer build and added quickness.