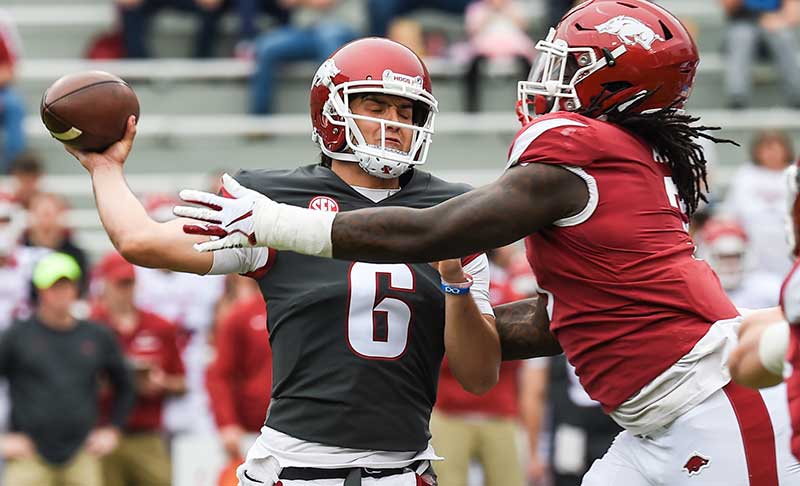 Only players were made media available Saturday afternoon, hours after completing their second NCAA-mandated helmets-and-shorts practice.

Morris talked with media Friday night after the Razorbacks practiced for the first time this August preseason. Morris gave high marks to Friday’s practice compared to a year ago  preceding last year’s 2-10 season.

“We have been together for 18 months,” Morris said. “They know exactly what we expect. There is no doubt in my mind this football team is more full capacity than a year ago.”

A lengthy Gatlin absence would be a setback. Morris and offensive line coach Dustin Fry relished Gatlin playing the maximum four games, including one start, in 2018.

Hicks arrived in January from SMU where he had been signed  and redshirted in 2015 by Morris and now second-year Arkansas offensive coordinator Joe Craddock, and their starting QB in 2016 and 2017, and Arkansas first-teamer off spring ball.

Starkel, arriving with a bigger arm and two years remaining eligibility to Hicks’ one, transferred in June as a SEC letterman at Texas A&M.

Hicks’ UA ties are obvious via Morris and four UA assistants accompanying him from SMU. Starkel, a 2016 prep hot commodity in Argyle, Texas, while Morris and crew were at SMU, has prior ties, too, including defensive coordinator John Chavis and defensive backfield coach Ron Cooper. Both last year came from Texas A&M to Arkansas.

“First off, Coach Morris and Coach Craddock and the relationship  we had in high school,” Starkel said of how  Arkansas enticed him. “And in college I got to play with Coach Chavis and Coach Cooper. I love them and love working with them, huge fans of both of those guys, and I know they are a fans of me. It means a lot they would want me on two separate teams. And I came to visit and fell in love with the place.”

“That wasn’t really a factor for me,” Starkel said. “I’m not scared of anything like that. There’s always going to be competition wherever you go.”

“I think the guys understand that this is a business and competition is part of it,” Hicks said. “I think it’s good for me, pushes me to have to be at my best every single day.”

“Ben thrives with competition,” Craddock said. “He got himself better when we brought in other guys trying to beat him out.”

“We had an Arkansas quarterback, Rafe Peavy, transfer to SMU after my second year,” Hicks said. “And we had another guy, (former Wisconsin quarterback) D.J. Gillins come in. So this isn’t a new situation for me.”

Both say the ultimate goal is winning games, and that they have been supportive of each other and supportive of and received support from redshirt quarterback John Stephen Jones and summer arrived freshman QB KJ Jefferson and letterman holder Jack Lindsey.

“The whole quarterback room has been really great helping out each other out,” Starkel said.

But Starkel has asserted bluntly: “Quarterbacks in a quarterback room can never really be best friends.”

At other positions, players may alternate frequently.

Other than the rare two-quarterback system, QBs seldom interchange other than via injury, ineffectiveness or lopsided score.

“Every quarterback in the country knows only one quarterback can play at a time,” Starkel said. “That’s just part of football from the New England Patriots down to a Pewee football team. Every quarterback knows that from when they were a little kid.”

“We push each other and are encouraging, but at the end of the day one of us wants to be the quarterback,” Hicks said. “At  times, it’s not always a comfortable situation because there’s only one quarterback.”