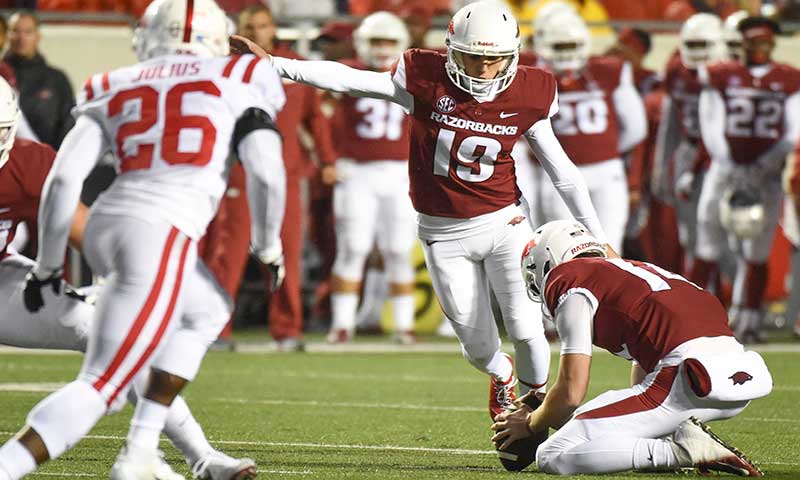 In tonight’s practice without pads, tight end Hudson Henry, defensive back Jalen Catalon, receiver Treylon Burks, running back A’Montae Spivey and a large class of large offensive linemen are among those debuting.

Hicks took command in the spring with 2018 quarterbacks Ty Storey and Cole Kelley since transferred and Connor Noland concentrating on pitching Razorbacks baseball. Hicks and big-armed Starkel will compete head to head. Their experience puts them ahead of redshirt freshman John Stephen Jones and incoming freshman KJ Jefferson.

“I hope it comes down between all of them,” offensive coordinator/quarterbacks coach Joe Craddock said. “It means I’ve done a good job as a coach to develop a young guy in KJ and continue to develop John Stephen. It’ an open race. You’ve got to go out and prove it on the field.”

Morris described Thursday during a SEC Today radio interview how soon he plans to announce his starting QB.

“In a perfect world, the sooner the better,” Morris said.  “I would love to get into camp and get some kind of rhythm going and name a guy as early as you possibly can. That’s what I hope.  I don’t know if it will happen that way or not. It will kind of work itself out.  I know we have a quarterback room that is very competitive and driven.”

Loy, the former Vanderbilt punter, transferred after redshirting at Colorado last year and moving on with now Ole Miss defensive coordinator Mike MacIntyre, who was fired as Colorado’s head coach. Loy competes in punting and kickoff areas that last year dogged the Hogs with inconsistencies.

Connor Limpert, a superb  Groza Award Preseason Watch List place-kicker with 19 of 24 field goals last year, did most of last year’s kicking off.

So Loy could wedge his foot in two doors, though it’s no given, Lunney said.

“We were thrilled to be able to get somebody of Sam’s experience in to help stimulate our competition, which is what you’ve got to have,” Lunney said. “Matt Phillips had a great spring for us. Matt is probably our most versatile specialist as far as place-kicking, kickoffs and punting.  It’s about competition, and I’m really excited to see Sam get after it with the the other guys. His experience is greatly valued.”

“Beaux Limmer, he’s a Brahma bull,” Carroll said. “Coming in as a true freshman he’s putting up some numbers a lot of our upperclassmen linemen are putting up.”