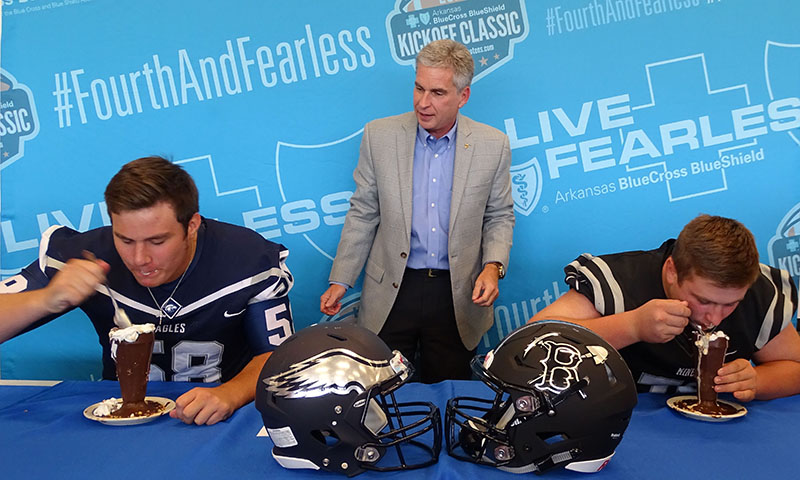 
The event has produced 22 eventual state finalists over the past 18 years. This year's version kicks off Saturday, Aug. 25 at North Little Rock's Charging Wildcat Stadium with a doubleheader featuring three teams that won championships a year ago. Upstart Bauxite takes on Conway Christian at 10 a.m., followed immediately by defending 2-4A champ Southside Batesville playing Warren.

On Monday, Aug. 27 the event moves to Southern Arkansas University in Magnolia, where all four participants qualified for the playoffs last season. Fouke plays surprising Parkers Chapel at 5:30 p.m., followed by Smackover against defending Class 2A champion Foreman. The Foreman Gators start 2018 as the top-ranked team in Class 2A.

“Arkansas Blue Cross and Blue Shield is pleased to be presenting the 2018 Kickoff Classic,” said Curtis Barnett, Arkansas Blue Cross president and CEO. “This competitive, championship-caliber high school football showcase is exciting to watch and always features some o the best talent in our state. We are especially thrilled to support the teams and towns where they live with our Pep Rally with a Purpose events. Prior to the teams meeting on the gridiron, we will be working side by side with them, the cheer teams and band members to pack meals that will stay in their local food pantries. Because our state is ranked second in the nation in the number of people facing food insecurity, we are making a deeper investment in the Arkansas communities where these students, coaches, teachers and administrators parents and other folks live, learn, work and play. Following our community service together, we will hold community pep rallies in their towns to celebrate the students' hard work and support their participation in the Kickoff Classic.”

Bauxite likely returns to the playoffs this fall for the first time since 2009 with a strong group of seniors. Conway Christian shared the 5-2A title last year while winning 11 games and venturing to the playoff quarterfinals.

Southside Batesville won a school-record 10 games and its first conference title last season. After winning playoff games in consecutive seasons, the Southerners aim higher in 2018. Warren won the Class 4A title in 2016, its fourth since 2001, and finished last year as state runner-up. Lumberjack receiver/linebacker Treylon Burks (2,026 yads and 27 TDs last year) is regarded as one of the nation's top prospects. Warren enters this year as the favorite to win Class 4A.

Fouke is amidst the best stretch in school history, qualifying for the playoffs a school-best five straight times. Class 2A Parkers Chapel won six games a year ago, the most since 2010.

Defending state champion Foreman opens as the top-ranked team in Class 2A, powered by senior QB Kyren Batey and eight returning starters on defense. Class 3A Smackover has won 50 games over the past five seasons.