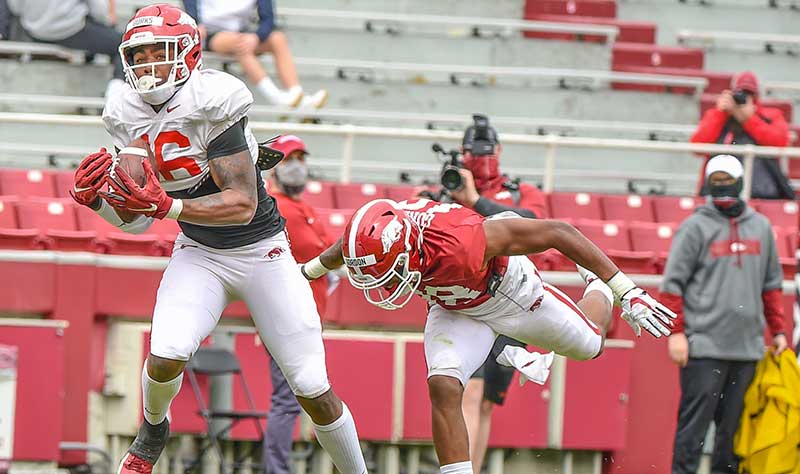 FAYETTEVILLE - The Arkansas Razorbacks conclude their 15 spring practices at 2 p.m. Saturday with the Red-White intrasquad game at Reynolds Razorback Stadium.

Admission for Saturday’s game is free, but tickets must be purchased online through arkansasrazorbacks.com.

“We won’t go live on special teams but will kick off and punt and do everything that’s necessary," Pittman said. "We’ll have a running clock until the two-minute point of the half and at the end of the game, and then the clock will go normal. We anticipate somewhere around 50 to 55 plays on both sides of the ball, not counting special teams.”

Despite a few injuries, Pittman said Saturday’s session will feature a healthy number of snaps with the first-team offense going against the first-team defense.

“I don’t know how we’re going to continue to get better if we don’t go good on good,” Pittman said. “So, we’ll go ones vs. ones.”

Pittman wants to review all available players to form a preseason depth chart in this last donning of pads until August.

“I don’t really know how far this game will go,” Pittman said in the spring evaluations. “Is it 20 percent of spring ball? Do you put that much weight on it? Probably not. We are interested in seeing who plays a little bit better when there are people in the stands. We’ve tried to do that partially (with fans attendance) with our (two previous) scrimmages. I think we’ll see some things we want to see and things that we don’t on Saturday, but I don’t know that it’s going to weigh a whole lot more than what a normal padded practice would weigh.”

In seeking the starting replacement for departing quarterback Feleipe Franks, Pittman said he and offensive coordinator Kendal Briles have been “hard on the quarterbacks.”

“The expectations are high for them and they are fine with that,” Pittman said.

Jefferson met expectations last winter when he subbed for an injured Franks as the starter at Missouri. Jefferson ran for one touchdown and threw three TD passes while completing 18 of 33 for 274 yards in the 50-48 loss.

However, until recent practices, neither Jefferson nor Hornsby has passed with the accuracy Pittman prefers.

“Malik is pulling the ball down and running the football when things aren’t there a little bit better instead of sitting in the pocket,” Pittman said. “I think we’ve grown. We’re not where we need to be, yet, but I think we’ve grown, and I think we’ll have a good quarterback room by the time August rolls around.”

Like all head coaches supervising intrasquad scrimmages, Pittman frees conflicting interests like a better pass rush from his defensive line and better pass protection and a more physical running game by his offensive line.

“We've gotten better,” Pittman said. “We can actually get some rush in the three-down line. We're playing more four-down line than we did last year, but I think we're going to be able to get to the quarterback without bringing linebackers. Certainly hope so.”

“Our line is much bigger, understands our offense much better,” Pittman said.  “So we have made some physical strides on the offensive line and in the running game. A lot of that has to do with the wide receivers blocking as well.”

The receivers, led by Burks (51 catches, 820 yards and seven TDs in 2020), make up the deepest position on offense. The secondary and linebackers, led by All-SEC safety Jalen Catalon and middle linebacker Grant Morgan, are the most heralded parts of the defense.