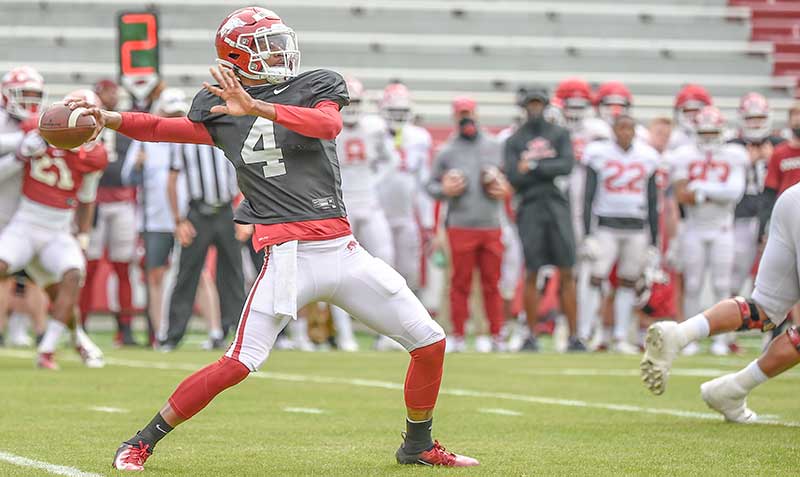 Not that he’s neglecting pass-protection for quarterbacks KJ Jefferson and Malik Hornsby (in Craven Whitlow photo above).

“I still want to work on pass protection more,” Stromberg said. "I think that was one of my strong suits last year, but I want to continue to grow in every aspect of it.”

“He is able to grab my hands sometimes," Stromberg said. "Sometimes I shoot my hands, and he grabs them. Not a lot of D-lineman I have faced have been able to do that. He uses his hands really well as a D-lineman. That is a big thing for a defensive linemen.”

CARTER ON STROMBERG
Carter lauded his 6-4, 316-pound center and teammate.

CARTER FITS SEC
After a redshirt year, Carter lettered in 2020 as a reserve who played most extensively when injuries afflicted the defensive line before a 27-24 loss to LSU.

“I felt that I could fit in this conference,” Carter said. “That I was able to compete. I’ve got to work on finishing and making an impact in the game.”

“It helped me a lot,” Carter said. “It helped me feel where I was at. There are a lot of things in football that I picked up that day, and I'm glad they happened the way they did. I know what that's like, so I'm trying to get adjusted now."

“I’m on the Red team (the first-team defense and second offense)," Carter said, "and we’re going against the White team with the first offense. We are going to bring our best and try to win this thing.”

“Marcus is really smart and super athletic," Stromberg said. "Ray (Curry, a second-year freshman offensive tackle) is doing pretty well, too. All of the young guys are doing pretty good, and they just need to keep going and buying in.”

Stromberg has two goals for Saturday with an obvious result.

“Just try and dominate as an offensive line and have a good game and have a lot of fun, too,” Stromberg said.