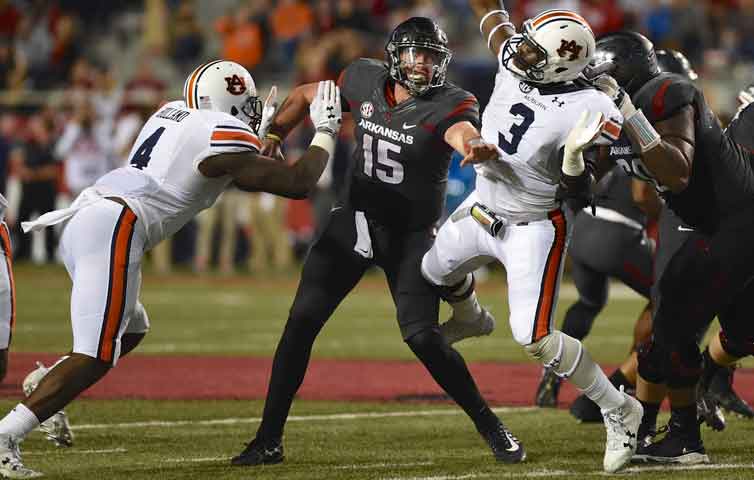 FAYETTEVILLE - Good friends off the field, Arkansas quarterbacks Ty Storey and Cole Kelley can’t remember when they weren’t battling for playing time on it.

But new coach Chad Morris said he won’t designate the starting QB until after preseason practices commence in August.

Storey is the nominal backup to Allen when Kelley redshirted in 2016. Kelley is last year’s backup who started four games when Allen was injured.

“I've been here before,” Kelley said. “Me and Ty both have. I think we push each other every day, and I know I wouldn't be the player I am today if I didn't have a guy like Ty to battle with, for sure.”

Storey said battling Kelley to start was little different than batting him for backup.

“It’s college football," Storey said. "If you’re here, you’re going to be battling. Everybody is battling. It just comes down continuing to get better every day.”

BACK TO THE FUTURE
Kelley and Storey feel vaguely rooted to Morris’ Clemson past when he coordinated the offense and called plays for Coach Dabo Swinney.

“I watched film of him at Clemson with Tajh Boyd,” Kelley said when Morris was hired away from SMU last December. “Tajh Boyd (the former Clemson QB Morris coached) is one of the top-three quarterbacks I've ever loved in college.”

“Yeah, it’s very similar to what we did in Charleston,” Storey said. “I think Coach Kendrick actually went to Clemson (Morris also coordinated Tulsa’s offense prior to Clemson) when he (Morris) was there and got similar stuff. We use a lot of it so it’s really cool to see the similarities to what we did in high school to what we are doing now.”

NEW LEASE ON LIFE
Since last year’s staff ultimately rated Kelley ahead of him, Storey was asked if he feels the coaching changes provide him a new opportunity.

“Yeah, I think it’s good for a lot of people,” Storey said. “I mean, the last staff, I’m not saying anything bad about them. We had some great years and learned a lot from those guys. But it’s definitely a new start.”

From Bielema and Enos to Morris and Craddock, Storey has spent years improving his throwing motion since doing what came naturally at Charleston.

“I’ve gotten a lot of work with several coaches," Storey says. "I’ve been going out to Dallas, and (passing game guru)  Zach Robinson has really been helping me a lot. He gave me drills to go through, and then Coach Craddock has been helping me so much. I really appreciate those guys and everything they’ve done for me.

"In high school, I wasn’t worried about any kind of motion. I was just playing football. To a certain point, that’s still what you’ve got to do, but in the offseason it’s cool to go back and try to do the technical things you need to do to get a little bit better.”

CRADDOCK ASSESSES
How did Morris and Craddock assess his scrimmage?

“I think they're doing good,” Craddock said. “They're really studying the playbook and really learning. They're all doing a really, really good job. Cole has had his best three practices here recently and hopefully he'll continue to build on that. He's pushing  those other guys, but they're also pushing him. So it's really a good competition right now.’ They're doing everything we're asking them to do. In the meetings whenever we ask them a question, everyone of them can pretty much spit out the answer.”