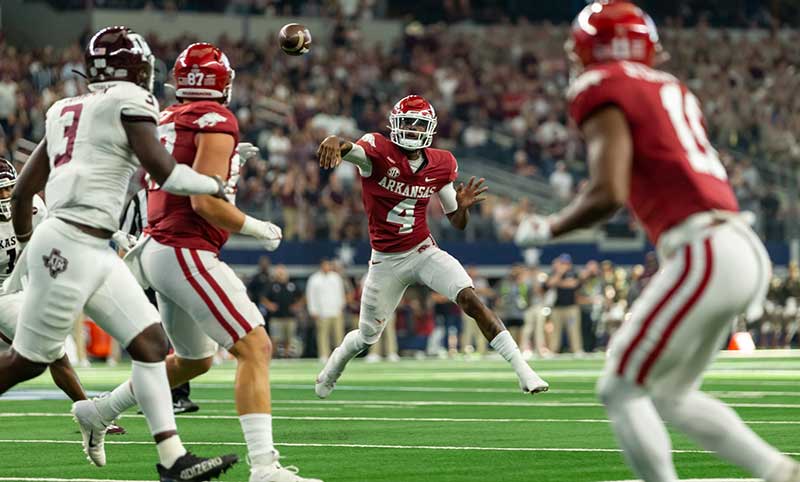 But Hornsby, a track athlete in high school who once recorded times of 10.88 seconds in the 100-meter dash and 22.39 seconds at 200 meters, dazzles his teammates with his speed.

“Actually, I’m pretty excited to see him wherever we end up putting him at on the field,” sophomore running back AJ Green said.  “Because that man is fast!

“I’m just glad to see he’s willing to do anything to help the team try to get some wins, get in the end zone a little bit for us. I’m excited to see what he can do.”

“I feel like he’s a good quarterback,” said Sanders, a 6-2, 221-pound sophomore from Rockledge, Fla., “but I feel like you put him at any position he executes just by his speed and his IQ of the game.”

Junior cornerback Khari Johnson was asked about defending against Hornsby as a receiver after having defended against him as a quarterback.

KJ TO THOMPSON
Redshirt senior Warren Thompson, who caught 19 passes for 304 yards and 2 TDs last season after transferring in from Florida State, made Tuesday’s most noteworthy reception, hauling in a long pass from Jefferson.

Williams is the son of 1980s Razorbacks linebacker Rickey Williams.

“I’ve had a few spring balls, so I  kind of expected the first practice back is going to be  little bit hard or whatever but it really wasn’t that much different,” Williams said. “I feel like everyone was there and a lot faster today.  We were into it.  So I feel like that week break didn’t really change anything.  I think it actually gave us more energy and made us go harder.”

“I would say it’s a testament to Coach Walker and his staff for giving us a schedule to follow throughout spring break,” Johnson said.  “A lot of us, I felt like, followed through with that, so we were able to have an exciting practice. Still have to clean up little things, like transitioning on and off the field, but we’re getting there.”

FROM SHORTS TO PADS
The Razorbacks’ practice — in shorts Tuesday — was the fourth of the 15 allotted by the NCAA. The Hogs are scheduled to work out in full pads on Thursday, and will work again on Saturday with practice entirely closed to media and the public.

“Definitely, like Coach Pittman said, we want high intensity,” Williams said. “So just going into that next drill a little bit faster. I think it’s going to be a good Thursday.”

RUSHING THE PASSER
Williams was asked about the emphasis on rushing the quarterback that new defensive line coach Deke Adams has brought to the defensive line.

Adams, a former Southern Miss linebacker, coached most recently at Florida International. He has worked in the SEC at South Carolina (2013-2015), Mississippi State (2019) and Ole Miss (2020)

The Hogs recorded 24 sacks in 13 games last season under Jermial Ashley, who was fired by Pittman in January.

“ I feel like we've gotten a lot better,” said Williams, who accounted for 23 unassisted tackles and 2.5 sacks in 2021. “From all the different coaches we had, we learned different techniques and stuff like that. Coach Deke Adams, he brings something new to the table. And I feel like he really knows what he's talking about, like with different aspects of how to rush — not just, like you need to switch your stuff up. You just need three different moves to rush, and he teaches us that so, you know, I feel like he's brought us together more as a team like as a defensive line. And he's just helping us with our pass rushing and stuff like that. So, I feel like that's the reason we got a lot better.”

STROMBERG BACK
Starting center Ricky Stromberg, who missed the final practice before the spring break with an injury, was back working with first team on Tuesday.