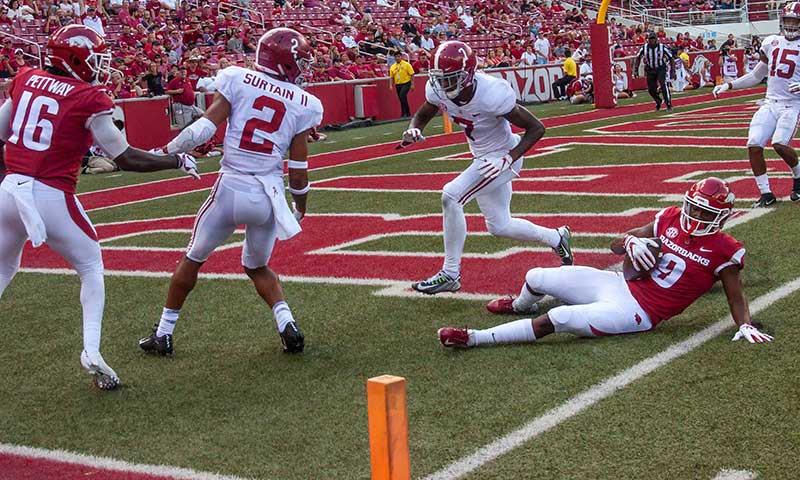 FAYETTEVILLE - The Razorbacks practiced Tuesday for the first time since last week’s University of Arkansas spring break but did so minus sophomore receiver Mike Woods (#9 in Craven Whitlow photo above).

Woods, 18 catches for 206 yards and a touchdown last season, is sidelined for the spring’s duration because of a broken wrist.

"He had surgery on his wrist. He’ll be back in early summer,” Arkansas coach Chad Morris said. "I know Coach (Justin) Stepp is excited about his receivers room but disappointed that Mike Woods is not going to be out here. He really needed spring.”

The Razorbacks are off Wednesday and will practice Thursday and Friday and scrimmage Saturday.

“I thought our energy level was the best it’s been all spring, and we’ve had some good energy days,” Morris said. “I thought we started out strong and remained strong.”

Cunningham has been contesting at left tackle with incumbent senior Colton Jackson of Conway, but Morris and Fry have wanted to check him out a guard.

Shane Clenin, who began spring drills at first-team right guard, is out for the remainder of spring drills with a broken foot, so redshirt freshman Ryan Winkel worked at right guard Tuesday with Cunningham at left guard.

So is Cunningham a guard or a tackle?

“As far as our long term plan for Myron, he’s getting into our top five (linemen), and we’ve got to find a place to put him on the field,” Morris said. “He’s got a chance to be a really special player. We’re very pleased with him. He looks good at tackle. He’s pushing Colton Jackson, and Colton is having as good a spring as he’s had. So that’s great. What we’re trying to find is his (Cunningham’s) best fit inside for our football team.”

“Ryan is growing as you would expect of a redshirt freshman,” Morris said. “He’s got his ups and downs but I’m really excited about him. Dalton Wagner is doing some really good things. I’m excited where our offensive line is going, but we are a long way away.”

In the first practice opened fully to media this spring, the defense appeared to get the best of it.

POINTS OF EMPHASIS
However, Morris said there scripted plays for “emphasis” designed to put one side of the ball and then the other at a disadvantage.

Morris said the contact work included unscripted open plays seeing who got the best of it on equal footing.

“It’s tough to block Sosa,” Morris said. “Sosa has been disruptive all spring.”

Agim has played defensive end and tackle the past three years but strictly defensive tackle this spring.

“I think he has accepted the moving inside and understands if he can continue to focus every day on just his technique and fundamentals, he can be as good as there are in our league,” Morris said.

Walk-on Jack Lindsey lettered last season as the holder for Connor Limpert’s place-kicks, but the former Springdale High QB alternated on the second-team offense Tuesday and surprised the second-team defense with a long bomb to receiver Koilan Jackson.

“He’s as smart a quarterback as we’ve got,” Morris said when asked about Lindsey, the son of former Razorbacks tight end Lyndy Lindsey and grandson of 1964 Razorbacks national champion great Jim Lindsey. “He understands the offense. He’s truly a coach out there on the field for these guys, and he’s done a good job and got quite a few reps so far this spring. I feel comfortable with Jack.”