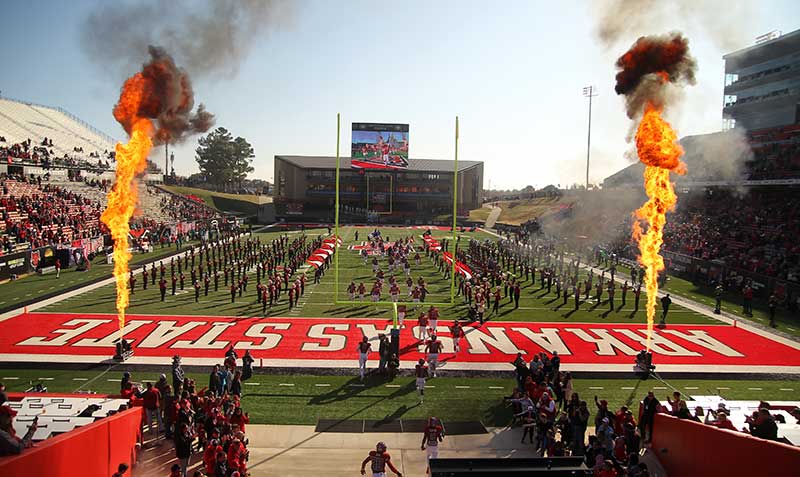 Following the outing that gave A-State fans their first look at the 2021 Red Wolves, Jones was quick to state the program’s appreciation for the support from the fans, the A-State band, the Red Wolves Dancers, the families of the players and many others who made it a successful event.

“We talk about the vision of creating a community event, so thank you to all the individuals who came out to support their team,” said Jones.  “I’ve been told this was the largest spring-game attendance we’ve had in many years, and that means a lot because that is part of the culture and mindset we’re developing here.”

While there were no live kicking situations, the Red Wolves’ treated their final practice of spring camp like a traditional game with the team split into two squads and playing four quarters of action.  The gray team took a 6-0 lead into halftime behind a pair of field goals from senior kicker Blake Grupe.

The Red team struck first in the second half on 35-yard touchdown pass from freshman quarterback Wyatt Begeal to sophomore receiver Seth Hayes, capping a six-play drive covering 86 yards.  However, the Gray unit responded with a third-quarter touchdown of its own and found the end zone again with 7:27 left in the fourth to complete the scoring.

Both second-half touchdowns by the Gray team came on passes from junior quarterback Layne Hatcher, who first found sophomore wideout Antonio Ruiz on a 23-yard score and then junior receiver Te’Vailance Hunt from four yards out.

“It’s difficult to judge a spring game because there are so many things that go into it, so the biggest thing we wanted to do was evaluate what type of relentless competitive attitude that our plays have,” said Jones.  “If you look at the makeup and DNA of successful programs and teams, they have that relentless competitive attitude on every single snap.  That is what we wanted to see, so we’ll go and evaluate the film, but I liked the way our players competed.”

There were several spring-camp team awards presented during halftime of the event as well.  The football staff chose five individuals who maintained consistent success on the field, in the weight room, and in the classroom.

Sophomore defensive back Taylon Doss was issued the “4-6/A to B” award for his performance on special teams and in the secondary.

Fans had the opportunity take in more than just the on-field action as there were multiple fan-engagement activities associated with the day, including a punt-pass-kick competition for youth in grades 1-6, tailgating, and “Fan Fest” events.

In addition to the spring-camp team awards, there were a couple of special presentations honoring players from the 2020 season.  Former All-America receiver and 2020 Sun Belt Conference Offensive Player of the Year Jonathan Adams Jr. was named the Larry Lacewell MVP.  The honor is issued annually to the team’s MVP, recognizing excellence on the field and in the classroom, leadership, integrity and commitment to teammates.

A senior on this year’s team, Ivory Scott Jr. was presented with the 2020 Withrow Award Trophy, which is presented annually to A-State’s outstanding offensive lineman of the year.

The Red Wolves will host Central Arkansas on Saturday, Sept. 4, in their 2021 season opener.  Season football tickets are available and may be purchased through the A-State Ticket Office, located at First National Bank Arena’s lower red entrance, in person or by phone at 870-972-2781.