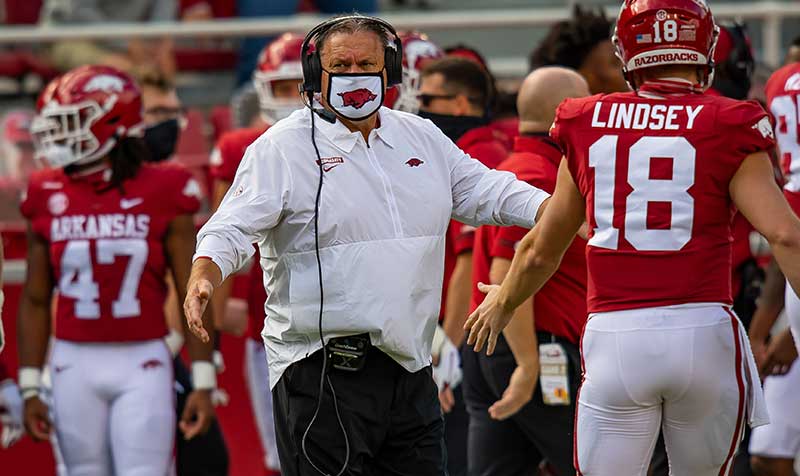 FAYETTEVILLE - Arkansas coach Sam Pittman can identify all his Razorbacks without a program Tuesday when the UA opens spring camp.

The second-year head coach couldn’t do that last spring when he spent the off-season on the recruiting road after his December hiring, and covid-19 protocol killed spring drills.

“That’s a positive,” Pittman said Monday. “My biggest fear last year is you guys were going to ask me about somebody that I had  no clue who he was, but you were very kind and didn’t do that. In other words: A year ago, we were guessing about what position to put a kid.”

For the most part the staff knows who’s going where this spring, although it will drill some players at different positions during the 14 practices that conclude with the April 17 Red vs. White game.

“I think we learned last year because of covid, injuries, opt-outs, that we used different kids a lot,” Pittman said. “We were ready for that because of the way we practiced, and we two-spotted and moved kids.”

Covid remains a concern. All practices, starting with this week’s non-contact drills Tuesday and Thursday, are closed prior to the spring game.

Franks’ tangibles and intangibles last fall during Arkansas’ 3-7 season cannot be discounted. But as far as the run-pass dual-threat QB that offensive coordinator Kendal Briles would recruit, Jefferson and Hornsby better fit the mobility specifications.

“Kendal’s offense - and I’ve watched it on tape before he was hired - I think who we have at quarterback right now is probably tailored to his offense a little bit more than even Feleipe was.” Pittman said. “Because Feleipe was what I’m going to call a surprising runner. He ran  better than what I thought he would.  These guys are certainly capable of being a running back as well. They can all throw or they wouldn’t be here. So, I think it will be more of Kendal putting in everything in his offense that he can vs. some of the the things he may not have had last year because of Feleipe and our depth chart.”

Franks brought instant credibility last winter when he transferred from Florida as a former starting QB. Jefferson earned some cred at Mizzou by completing 18 for 33 passes for 274 yards and three touchdowns with a rushing TD.

“The team believes in him,” Pittman said. “Heck, I believe in him. He's done a nice job. His work ethic has shown leadership in itself, and he's becoming more vocal. He’s vocal as he needs to be. Feleipe wasn’t a very vocal guy, either, but his work ethic was, and that’s the same way with KJ.”

As a group, the raft of returning receivers led by junior Treylon Burks, (51 catches, 820 yards and seven TDs) leads the offense, Pittman said.

With repeated concussions and knee injuries compelling promising offensive tackle Noah Gatlin to retire, much of the line’s focus this spring rivets on University of Charlotte transfer Ty’Kieast Crawford (6-3, 335). He should compete with incumbent Dalton Wagner at right tackle, while senior Myron Cunningham returns at left tackle.

“Our plan is to play (senior) Shane Clenin a little bit more at center and try to take a little pressure of the combination of Ty Clary playing guard and center and maybe let him develop better at guard,” Pittman said.

“Obviously, Smith (Arkansas’ leading rusher with 710 yards last season) has earned that spot, and we're going to let him go and see if he can continue to improve on what he has done this far." Pittman said.

The defense returns a veteran secondary led by safety Jalen Catalon, last year’s only collegian with both 95-plus tackles and three interceptions, and a veteran linebacking corps led by All-SEC senior linebacker Grant Morgan.

Pittman only listed four players, all coming off surgeries, as unable to practice this spring. They are receiver/kick returner De’vion Warren, Koilan Jackson, Collin Sutherland and linebacker Levi Draper.