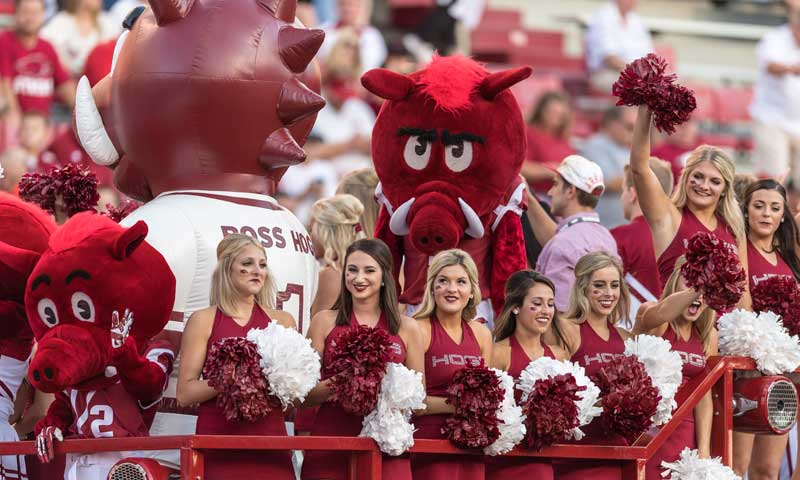 FAYETTEVILLE - SMU graduate transfer Ben Hicks has arrived at Arkansas as a new quarterback, but he showed Arkansas linebacker Bumper Pool on Friday that he’s an old hand at Coach Chad Morris’ system.

Hicks was Morris’ redshirting freshman SMU quarterback in 2015 and his starting SMU QB in 2016 and 2017. Morris left SMU before its December 2017 Frisco Bowl to become Arkansas’ coach. Hicks practiced with the UA for the first time Friday as a January graduate in the first of 15 spring practices.

Friday was the mandatory opening practice and Saturday’s workout will be in sweats, but it was enough to impress sophomore linebacker Pool.

“His confidence is like no other when he steps on the field,” Pool said. “He knows the offense. He knows what those guys are doing, and he coaches the receivers to run the routes the correct way and get after it. He has a confidence about him, and he’s brought that confidence to the whole quarterback room.”

Pool was a December high school graduate going through his first Razorbacks spring practice this time last year. Lettering behind  graduated inside linebacker Dre Greenlaw and knowing what’s expected in the off-season by strength coach Trumain Carroll has made a difference, Pool said.

“It felt good,” Pool said. “The conditioning we had in January and February paid off.”

Get bigger and faster and stronger, Pool was told.

“I’ve been putting on weight and moving around better and just studying the game more,” Pool said. “I feel it’s coming more natural this spring than last spring.”

Pool says he was excited to be the guy with Greenlaw gone.

“Dre taught me a lot, and I’m excited to take that next step,” Pool said. “I texted him yesterday and wished him good luck. And he texted ‘Continue to work and get better.’”

Senior All-SEC linebacker Scoota Harris said it was “different” not having Greenlaw starting alongside him as  the last three years.

“But I played lot with  Bumper last year so it’s not that much different,” Harris said. “Now once Bumper comes out and somebody else comes in I actually feel a difference.”

A lot of new faces adorn this Razorbacks team, and that’s  a good thing with Harris considering the Hogs floundered 2-10 last season.

“Yeah, it’s a new year,” Harris said. “Just getting restarted for the whole program. With all the new faces, it feels a little different. More younger guys, guys with not that much experience. But it was a pretty fun day. They didn’t have as many mistakes as I thought they would have.”

Harris has a spring program under Morris and defensive coordinator John Chavis.

“We (Chavis) had a talk after the Missouri game and went out to eat,” Harris said. “He told me how the spring would go for me. Less contact and more work on the things I need like pass coverage and stuff like that. It feels good.”