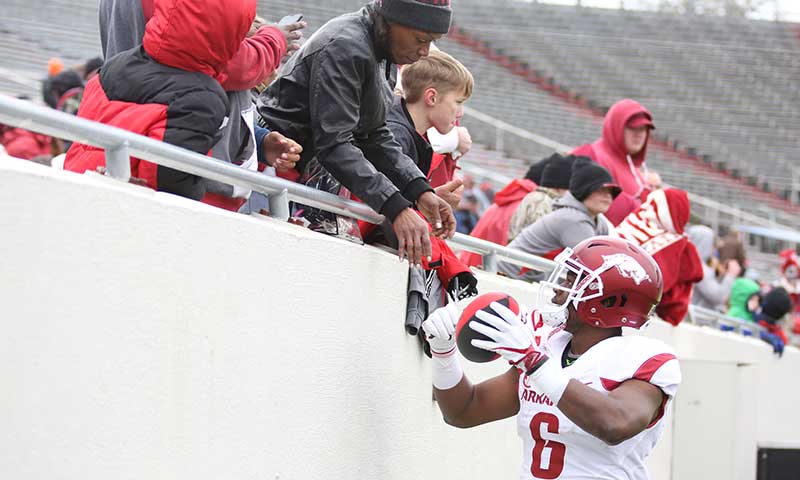 FAYETTEVILLE - Junior two-year letterman running back T.J. Hammonds (in photo above) no longer is part of the Razorbacks, Arkansas coach Chad Morris said without elaboration during his pre-spring presser.

Hammonds played in four games last season because of a knee injury.

Running back, with top returning rusher Rakeem Boyd recovering this spring from shoulder surgery and Maleek Williams transferred, will be a depleted spot as Morris’ Razorbacks commence the first of their 15 spring practice dates on Friday.

UA cornerback Jordon Curtis, a sophomore letterman and a running back at Jenks (Okla.) High School has been moved to running back joining senior Devwah Whaley and junior Chase Hayden as this spring’s running backs returnees.

Cornerback Britto Tutt and defensive tackle Briston Guidry along with Boyd have long been ruled out of spring ball while recovering from medical issues they hope have healed by the start of the August preseason.

Morris suffered a 2-10 debut last season after inheriting a 4-8 team from predecessor Bret Bielema. Morris talked at length Monday of teaching a culture change last season and seeing it implemented in the winter off-season.

Morris said the culture has tangibly made its mark in the second year of winter conditioning and strength workouts set forth by strength coach Trumain Carroll who accompanied Morris from Morris’ 2015-2017 tenure head coaching SMU.

“I’ve been pleased with the second winter conditioning under Coach Tru and our strength staff,” Morris said. “It’s  amazing to see the transformation from Year One going through it the first time and now where these guys are coming out of  the second winter of conditioning. So excited to see there is a noticeable difference in their bodies and their conditioning and the expectations you would expect in Year Two.”

While all of the nationally Top 25 recruiting class signed during the December and February signing periods won’t officially practice together until August, enough junior college transfers and December high school graduates have arrived to already make an impact, Morris said.

Senior left offensive tackle Colton Jackson of Conway and third-year sophomore Shane Clenin have especially responded to the newcomers’ challenge, Morris said, seeing a similar rise among the returning receivers because of Knox and Nash.

“Those guys have brought a lot of energy and a lot of competition to our wide receiver room,” Morris said. “I have seen De’Vion Warren and Deon Stewart and Mike Woods, Jordan Jones, Koilan Jackson have to elevate their game. There’s a sense of urgency in that wide receiver room, which is good to see.”

The urgency is exemplified coming off a winless SEC season with 17 players on the 2018 roster departing as transfers or for medical reasons.