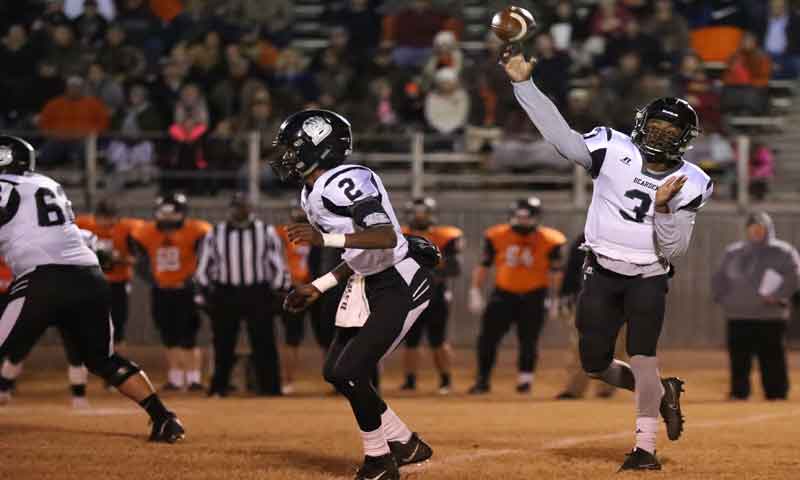 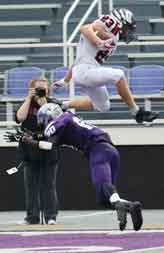 Ouachita Baptist University won the Great American Conference last season and captured conference titles in 2011 and 2014. The staff at OBU, regarded by many Arkansas high school coaches as some of the better recruiters in the state, continue winning the battles for top Arkansas talent.

OBU signed more than 30 players Wednesday comprised largely of Natural State talent, including the Alma duo of quarterback Garrison Jensen (6-1, 215) and Brayden Johnson (6-4, 205). Jensen completed 174 of 301 passes last season for 2,430 yards and 27 touchdowns with seven interceptions. The dual-threat QB ran 199 times for 1,051 yards and 18 TDs, and caught a 25-yard TD pass. Johnson, courted over the past year by several Division I schools because of his size, led the Airedales with 85 receptions for 1,180 yards and 16 TDs, averaging 5.3 yards per carry.

Ouachita signed three quality players from Class 4A state champion Arkadelphia, including safety Dillon Scott (5-10, 165), who made the game-saving open-field tackle and clinching interception on consecutive plays in the waning seconds of the championship game. The Tigers also signed former Badger fullback Jack Burnham (5-11, 200) and his twin, linebacker Josh Burnham (5-11, 200).

“The conference coaches voted him (Dean) all-state and he didn't play in the final two games,” Mena coach Tim Harper says. “That shows his level. He's the most accomplished, well-rounded, football player I've coached. He was one of the best in a conference full of college players.”

OBU's defense gets help from linebackers Marterious Daniel (6-2, 245) of Wynne and Hunter Swoboda (6-4, 225) of Bentonville West. Daniel anchored a defense that drove Wynne to three straight conference titles and a 2016 state runner-up finish. Daniel recorded 99 tackles this season, including 11 tackles for loss, two sacks and three interceptions. Swoboda played at Joe T. Robinson as a sophomore and junior before moving to Northwest Arkansas in late May 2017. Swoboda played in every game despite injuring his knee in a June team camp, racking up 89 tackles and two sacks. Both players could shift to defensive end in college.

Pea Ridge's receiver/safety Hayden Holtgrewe, the 2017 Farm Bureau Awards Class 4A Defensive Player of the Year, also signed with the Reddies. Holtgrewe led the Blackhawks to the 2016 state title game and helped the Blackhawks reach the semifinals in 2015 and 2017. He caught 83 passes for 1,271 yards and 15 TDs last season and registered 52 tackles.

Another Henderson signee, Bearden's Tyler Berry, was a two-time all-state selection and the 2017 Farm Bureau Insurance Awards 2A Offensive Player of the Year.. Playing QB and safety, Berry led the Bears to a first-round playoff win last fall at McCrory. Berry passed for 1,412 yards and 15 TDs in 2017, and ran for 765 yards and nine TDs. He assisted on 83 tackles, forced three fumbles and intercepted six passes. He swiped 11 interceptions the past two years. “His ball skills are incredible,” Bearden coach Ernie Horstkamp says. “He makes plays on both sides of the ball.”

Henderson State signed one of the state's premier kickers, Dardanelle's Temo Martinez  (5-10, 155), who made all 53 extra point attempts last season and seven of nine field goals. Martinez averaged 41 yards per punt and 66 of his 72 kickoffs resulted in touchbacks.

Arkansas Tech made one of the bigger signing day splashes, landing Blytheville offensive lineman Larry Clark. Clark had offers in the fall from Arkansas State, Kansas, Iowa State, Louisiana-Monroe and several FCS schools, but ultimately chose to remain in state. “Arkansas Tech is getting a very talented kid who had two Big 12 offers and lots of Division I interest,” Blytheville coach Ben Fisher says. “He's a better kid than a football player. He'll do whatever it takes to succeed.” Clark was courted over the past month by first-year South Alabama coach Steve Campbell, who coveted him while coaching at UCA the previous four years. “We went to a UCA camp when Larry was as a sophomore,” Fisher says. “The coaches loved him and were glued to his pocket, watching his every move.”

The Wonder Boys also signed offensive tackle Zak Kemp (6-6, 250) from Bryant, who originally committed to University of Arkansas-Monticello. They also signed a pair of running backs who played less than two miles apart on Highway 10 in West Little Rock. Andre Bradley (5-7,190) ran for more than 500 yards while helping Joe T. Robinson claim the 7-4A title and make its second semifinal appearance in six years, while Ladarius Burnes (5-9, 185) ran for more than 1,100 yards for 5A Central runner-up Little Rock Christian.

Southern Arkansas typically signs more players from north Louisiana and East Texas than from Arkansas, but the Muleriders secured signatures from eight Arkansas prep players, including West Memphis standout lineman Caleb Clark (6-5, 280). Clark turned down multiple FCS scholarships for the Muleriders. Hot Springs Lakeside running back Michael James (6-1, 200) signed with SAU after taking HS Lakeside to two conference titles and a 5A South runner-up finish in 2017. James ran for 859 yards and eight TDs in 2017 and almost 1,400 yards the past two years.