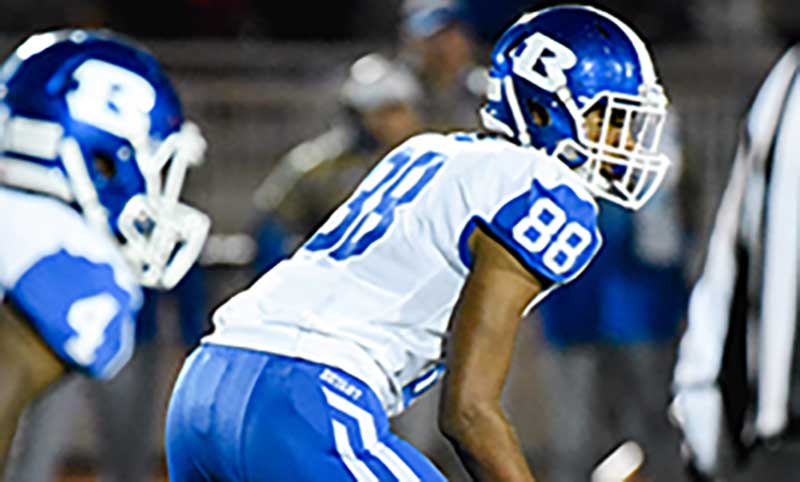 FAYETTEVILLE - To the nine they signed in December, new Arkansas head coach Sam Pittman and his staff announced Wednesday the signing  of 12 eager, incoming Razorbacks to open the February signing period.

Eager describes all 12 who signed before any 8 a.m. classes might have been on their schedule.

“I think the thing I like most about this group is they want to be a part of Arkansas,” Pittman said. “Now you are going to say, ‘Well, we know that. They signed with Arkansas. But by 7:47 this morning we had all 23 scholarships signed.”

Wednesday’s signees expected to report to the Razorbacks this summer include one graduate transfer, linebacker Levi Draper of Collinsville, Okla. transferring from the University of Oklahoma, and 13 incoming freshmen.

The 247 recruiting website jumped Arkansas’ recruiting rating from 119th nationally after Arkansas coach Chad Morris was fired to No. 29 today after two months of hustling by Pittman’s staff.

“We ended up having a good class,” Pittman said. “The  credit goes solely to our assistant coaches. They went out and built relationships in a short period of time. And I think that tells you a lot about who we have on our staff.”

Pittman wasn’t nearly as concerned with the recruiting rating number as with the numbers at positions that needed increasing among 15 signed for defense and eight for offense.

“We went out with positions of need,” Pittman said. “Those five positions were quarterback, tight end, and basically the defense:  D-line, linebackers and cornerbacks. When I say needs, I’m not talking about talent. I’m talking about numbers. Our numbers were low on the defensive side of the board and at tight end and quarterback. And so we went out there and tried to address those needs.”

At quarterback, graduate transfer Frank comes with bona fide SEC credentials from his Florida days until his 2019 injury caused him to be replaced by current Gators QB Kyle Trask.

Malik Hornsby was among Arkansas’ most heralded Wednesday signees rated four-stars by 247 Sports and ESPN and reportedly sought by Alabama, Auburn and Georgia among others before opting for Pittman and new Arkansas offensive coordinator Kendal Briles.

“Malik, he was the guy we wanted, you know,” Pittman said. “He’s the guy we went after. He had a great relationship with Coach Briles. Kendal did a great job of recruiting him and has for a long time. There’s a guy who can throw it and run it and certainly would be ideal for the type of offense Kendal is planning on running.”

On Franks, Pittman said, “Feleipe Franks has proven he can do it in this league and do it at a high level. I’m not saying he’s going to win the starting spot, but it’s a big deal to get him.”

As the successful offensive line coach at Georgia, and before that at Arkansas under Bret Bielema with the Arkansas O-line performance dropping significantly the past four years with Pittman gone to Georgia, Pittman was asked about the O-linemen he signed.

“Well, they’re all three big,” Pittman said of Marcus Henderson (6-5, 300), Jaqualin  McGehee (6-4, 255) and Jalen St. John (6-5, 310). “They’re massive guys. You know, defenses in our league, they have big people over there. So we wanted to go size to begin with. And of course we got Ray Curry Jr. (6-6, 315) in the early signing period. A guy who  is a very good athlete who we think we can develop him. He’s probably a little stronger than your typical high school lineman. And then Marcus Henderson, very talented guy. He took his body from he might have been 335-340 and now down around 290. He needed to do that. He played a lot better this year, his senior year, doing that. We’re awful glad we ended up getting him. And then we had Jalen St. John, who is probably the biggest of that group. I think he’ll be a really good player for us. I don’t know how fast they’ll play or anything of that nature. We need to learn more about our own team first on that.”

“Our defensive board, I think we had 13 guys, 14 guys committed early,” Pittman said. “So I think that guys want to come in and play for Coach Odom and those guys.”

While asserting his intentions mostly are to recruit regionally Arkansas and surrounding states, Pittman with his ties in Georgia, matched four Georgia signees with four from Arkansas, three from Tennessee, three from Texas, two Oklahomans, two from Louisiana, two from Florida; and one each from Illinois, Missouri and the eyebrow raiser with defensive back Khari Johnson from Connecticut.

“Sam Carter (the new cornerbacks coach) knew him,” Pittman said. “A lot of other schools got involved with him after he committed to Arkansas.  We were really excited to get him. He’s fast.”

The Razorbacks on campus are headlong into the off-season conditioning program headed by new strength coach Jamil Walker, hired by Pittman from Georgia.

The Razorbacks start spring practice March 25, take a break for the UA’s spring break and finish their 15 spring practices with the April 25 Red-White spring game.

The Red-White game is scheduled for War Memorial Stadium in Little Rock, but Pittman said the UA awaits NCAA clearance to move it off campus.