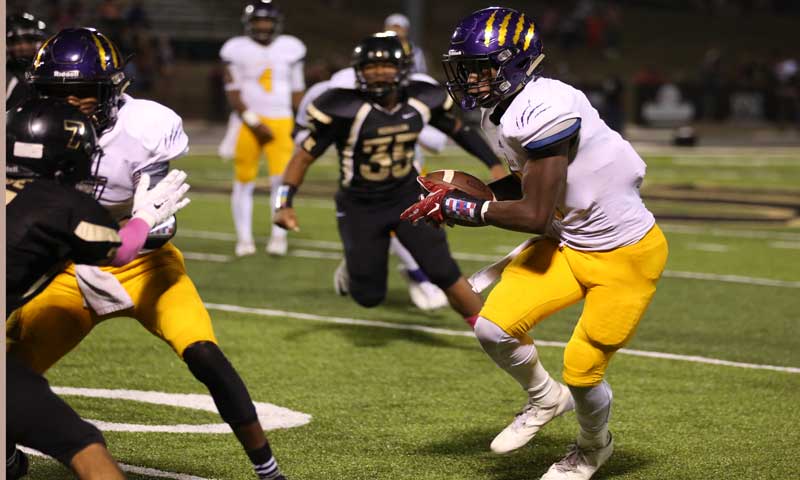 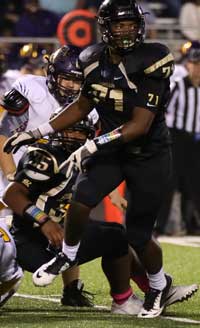 Sixteen players signed Wednesday with the Razorbacks, joining 10 who were eligible to sign in December as junior college transfers or December high school graduates.

They join offensive lineman Kirby Adcock of Nashville, a December signee already enrolled at the UA and partaking of the Razorbacks’ off-season conditioning program.

Henry, the brother of former Razorbacks All-America Mackey Award winning tight end Hunter Henry, Clary, and Gabe Richardson, a junior college transfer linebacker from Decatur, Ga. are so-called “blueshirts,” arriving as walk-ons in 2017 to be put on scholarship in 2018 and counting on the 2018 25-man scholarship limit.

“We captured the commitment of every player we offered in the state of Arkansas,” Bielema said. “And that has happened pretty regularly around here. Obviously, some kids in the state went to other schools, even some Power Fives, but they were not offered by us. I felt really good about the class getting the ones that we could.”

Assessing who Bielema and his staff signed altogether, why does he deems this his best class? 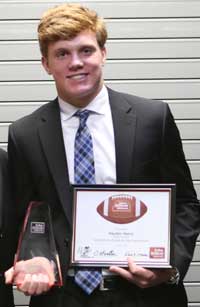 UA signee HAYDEN HENRY
“It addresses the needs that we have right now with some players that can help us immediately,” Bielema said.  “I think to get those offensive players in at the positions that we did can keep our offense moving in the right direction. I think defensively, transitioning (from a 4-3 base defense)  to a 3-4, we need some more athletic-type players at linebacker and DB. Maybe some D-linemen with a little bit more girth to them that can play those ends and inside positions is a really, really big.”

Graduation and departures hit the Razorbacks hard at receiver and in the secondary where the 3-4 defensive scheme puts premium on players of hybrid defensive end/outside linebacker size and abilities.

“In the secondary, a couple of guys joined us here in the last two to three weeks,” Bielema said. “Then of course Chevin joining us today was some icing on the cake. I really felt we had neglected that, not on purpose, but just the way it panned out the last two years. Really felt we needed some young players to step in in that role and probably excited. It might have been as deep and most established a defensive back class as I've ever been around.”

Hayden Henry (6-3, 215) will be groomed to grow into an outside linebacker/defensive end.

Bielema said he had recruiting coordinator E.K. Franks coordinating a effort for 3-4 defensive personnel even with the Razorbacks still in a 4-3 under former defensive coordinator Robb Smith.

“I would say after the first month of the season I knew what we were going to do," Bielema said. "We were going to a 3-4 scheme. So Coach Franks and I drew up our numbers in the board meeting room. We took our current roster and divided it up into a 3-4 look.”

The graduation of receivers Drew Morgan, Keon Hatcher, Cody Hollister and Camden Fairview’s Dominique Reed had Bielema scurrying for receivers like a Spread coach, which he is not.

“We knew we were going to go after a couple of junior college guys,” Bielema said. “The first guy we went after, the highest guy on our board was Brandon Martin. From the time we evaluated junior college film. I just fell in love with his film, but then you get a chance to visit with him. His demeanor, his personality, I always make reference when … we always have the recruits out to our house and when Jen (Bielema’s wife) saw Brandon she's like 'Is that a defensive end?' I go 'No, that's a wideout.' And anytime someone gets involved with those two differences it's kind of funny. But he's been very, very good. Him and Jonathan Nance obviously have a relationship.  I just walked by Michael's  (receivers coach Michael Smith’s) office. They were both up in there studying film right now. The two in-state guys: Koilan is probably one of the more underrated recruits in our class. I think he is an exceptional athlete.  He's big, he's strong. He hasn't really played the wide receiver position all that much. He's mature. He's developed. Intelligent.”

As for Barnes, Bielema touted his athleticism for his basketball defense helping Cabot beat Bentonville and Malik Monk, the current Kentucky freshman star, in the 2016 state championship game.

“Jarrod's a really, really good athlete,” Bielema said. “A guy that probably can play multiple positions for us.”

On the offensive line, the Razorbacks in December signed (6-9, 320)  freshman Daulton Wagner and Adcock and on Wednesday added Shane Clenin (6-6, 295) of Festus, Mo. and Clary.

With Austin Allen back for his senior year at quarterback and Cole Kelley redshirted last year and Ty Storey returning after working as  last year’s nominal backup, Bielema signed one quarterback Dalton Hyatt of Attala, Ala.

Jeremy Patton, the tight end signed in December from Arizona Western Junior College, is completing his junior college degree online at home in Indianapolis and on course to join the Razorbacks this summer, Bielema said.

Bielema said he used being on the road in recruiting as occasions to interview candidates numerically to replace Robb Smith.

Defensive backfield coach Paul Rhoads was elevated to defensive coordinator, but the Razorback are one short of the nine-coach full-time limit presuming all assistants remain with signing day completed.

Bielema said he is continuing to research and interview candidates for the one vacancy and intends to have his staff complete by the Feb. 20 phase of offseason conditioning.