RECRUITING 3A: Mountain View at Salem 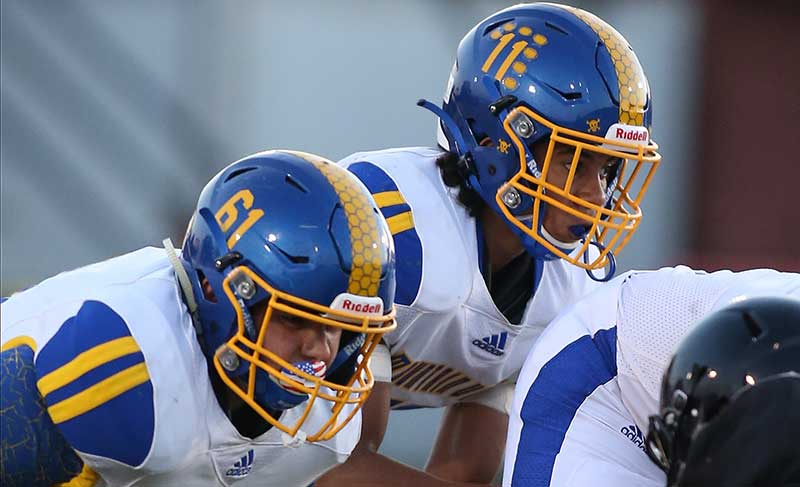 Extending that run this fall requires a strong finish, which could land the Yellowjackets a home playoff game.

The Yellowjackets downed Newport 26-8 two weeks ago and travel this week to Salem. They play host to Riverview next week and close the regular season at Melbourne.

“Beating Newport was good for our program,” Coach Michael Gray says. “Everyone in town was talking about it. We've put ourselves in a good spot, now we have to prove to everyone that beating Newport wasn't a fluke.”

A lack of football history is the biggest obstacle for  Mountain View. With five wins already, the Yellowjackets have equaled last year's win total. It’s the school's most victories since 2016, when it won eight games and the first conference title since 1987.

The Yellowjackets won 10 games in 2014, Gray's first season as head coach, including the only playoff triumph since the modern era began more than 50 years ago.

Mountain View averages 29 points per game this fall behind senior quarterback Elijah Carlton (6-3, 185). Carlton also plays running back, receiver, cornerback and safety. “He's great with the ball in his hands and hard to get a hold of in space,” Gray says.

Carlton committed to Harding University earlier this fall, and will likely focus on defense in college.

“He closes on the ball fast,” Gray says. “In seven-on-seven this summer at Hoxie, he went from one hashmark to the other to intercept the ball. He's so good reading it. Coach (Tom) Sears says he's the best they've faced this year.”

Rorie bench presses more than 300 pounds and “when you see guys on film flying around, it's usually him throwing them down,” Gray says.

Senior C.J. Rose (6-1, 175) shifted to fullback two weeks ago due to the injury of a teammate. Rose, who ran 21 times for 79 yards against Newport, could emerge as a college prospect because “he runs so strong,” Gray says. “He's a bull.”

Junior Trampas Stubbs (5-10, 175) “is our utility player,” the coach says. “We put him wherever we need help.” So far this season, Stubbs has lined up at fullback, tailback, QB and receiver. He’s likely headed for another all-conference season at cornerback. Gray believes Stubbs will get D2 offers over the next year.

Salem, which won league titles in 2018 and 2019 in the 3-2A, likely needs to beat Mountain View this week and get help from Riverview and Melbourne the next two games to make the playoffs for the sixth straight season.

Senior tight end/defensive end Tyler Siddons (6-5, 255) committed to Tulane in the summer. He also owns offers from Middle Tennessee, UCA and Harding. Siddons (#26 in Melissa Snyder photo) has logged 49 tackles this fall, with nine sacks and 11 tackles for loss.

Sophomore Elijah Romine (6-1,180) should develop into a college prospect. Romine promoted to the varsity for the final five games of 2020 as a freshman, and paced the Greyhound rushing attack with 523 yards.

Romine has been limited this fall with a torn labrum that will require postseason surgery. He played linebacker the past two weeks, leading the Greyhounds in tackles both games.

“Our guys know what’s at stake,” second-year Salem coach Josh Watson says. “Mountain View is much improved over last year, especially up front. We will have to play physical.”