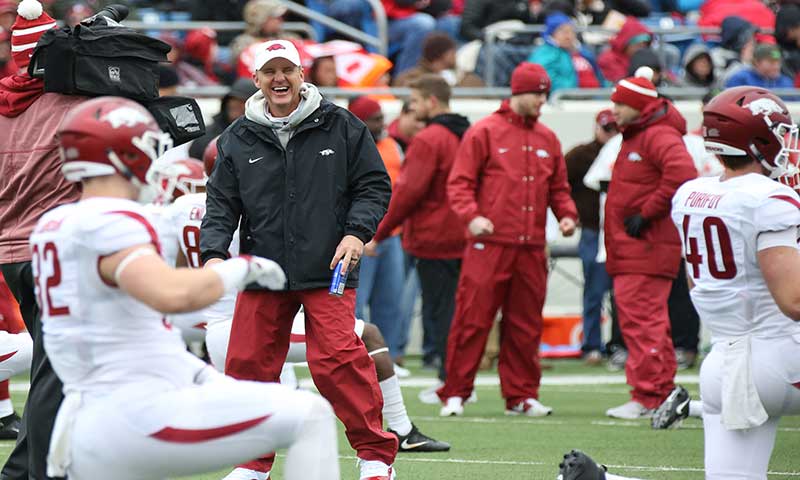 Morris announced the signing of 20 players, 18 high school seniors and two junior college transfer offensive linemen, with more to come possibly in the next two days and certainly for the February 6 signing period.

Obviously deficiencies abound after the school's second winless  conference campaign (2013 the other), going 0-8 in the SEC.

Receivers TQ Jackson, Knox, and Nash stand 6-4, 6-5 and 6-3, which elevates the receiving corps to a higher stature in Morris’ view.

Quarterback Jefferson was Player of the Year in Mississippi and joins a QB competition so wide open that Morris said he will evaluate graduate transfer possibilities.

“I love the ones we have,” Morris said. “But by the same sense, yeah, I anticipate bringing someone in, whether that be January, whether that be early summer or whenever that may be. But, we’ll see. We want the right fit.”

Offensive line numbers were so down from what Morris inherited from the previous Bret Bielema regime, and three senior starting offensive linemen graduated from 2018.

In order of addressing, here is Morris discussing the needs and how this class can help fill them.
“Speed and size at wide receiver, depth in both the offensive and defensive lines, guys that could immediately come in here and make an impact,” Morris said. “Addressed guys that would come in January (eight will enroll on scholarship as December graduates eligible to participate in spring practice)  and affect our roster and create competition.  We addressed with a quarterback to create depth, the player of the year in his state, to come in and continue to build the depth at that position.”

Already graduated 2019 senior-to-be Ty Storey, the starter for nine games in 2018, redshirted freshmen Connor Noland, a starter one game but staying within the maximum four-game limit eligible to redshirt, John Stephen Jones, third-year sophomore to be squadman Daulton Hyatt and walk-on Jack Lindsey are expected to return at quarterback.

Jefferson will still be in high school this sprig when the others are practicing with the Razorbacks but still will be evaluated in the August as one who could play right away.

“KJ starts us off right there at the quarterback position,” Morris said. “Big kid, big 6-3, 215. He runs really well. Throws the ball exceptionally well. Comes from a winning program.”

Freshman offensive linemen generally redshirt because O-line play is so complicated mentally and the most challenging to develop physically.

However, given the state of Arkansas’ line, Morris rules nobody out among the incoming rookies. He seems determined that no position has a starter by default.

“I’m anticipating some of these guys playing, as well as the guys that were redshirted last year,” Morris said. “What this is going to allow us to do is create competition, and we need competition at every position. We didn’t have enough of that this year, and I think we’ve addressed that and we’re not through addressing it, either.”

Regarding Cunningham and Nwanna, Morris spoke in specifics.
On Nwanna, Morris said: “Comes in and immediately has the range and the skill set to compete and compete quickly — on the offensive line, a must need.”

Regarding Cunningham, Morris said: “A junior college All-American  he’ll able to step on the field and make a huge impact.”

Cunningham, Nwanna, Gregory, Knox, Nash, Brooks, Soli and Williams are the eight midterm graduates eligible to enroll at the UA in January.

Morris seems elated that Soli, a 6-4, 230-pound defensive end with 22.5 in 2018 sacks at Douglas County (Ga.) High and the son of former Razorbacks defensive lineman Junior Soli, will practice with the Hogs this spring.

“A fabulous football player,” Morris said. “This guy is absolutely dynamic. He was wanted by everybody in the country. We anticipate him to come in and be here in January and compete to play.”

Brooks and Chavis were the only defensive backs, and Zimos the only linebacker and no tight ends or running backs signed Wednesday.

That will change Feb. 6.

Geographically, Morris stated upon his December 2017 arrival from SMU that Arkansas’ national 1960s peak under Frank Broyles was stamped by recruiting footprint first in Arkansas, next in Texas and throughout the Tulsa and Memphis vicinities and Louisiana and into Missouri.

Other than from Missouri, Morris’ 20 December signees for 2019 reflect the footprint he coveted including five from Texas, the state Morris coached high school ball for 16 years.