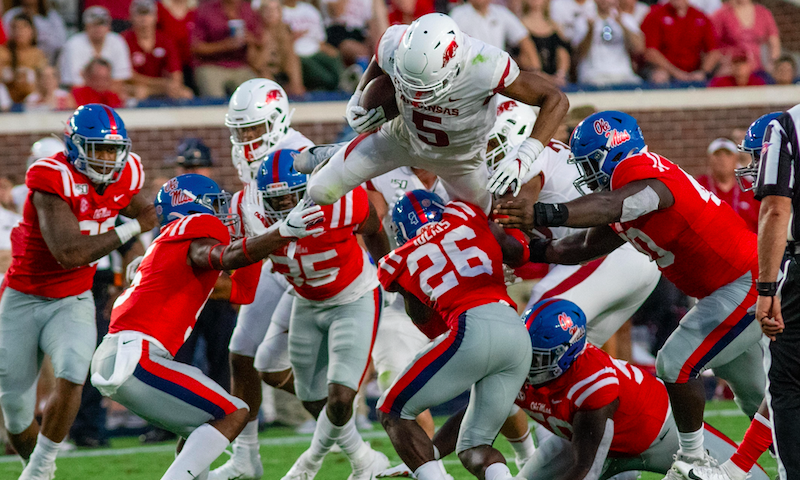 “I like where our mindset is right now and how we handled some adversity last Saturday night,” Morris says. “These guys came in Sunday and responded and I look forward to seeing what Saturday will bring for us (against Colorado State).”

“I think we learned a lot last year after this Colorado State game,” Morris said. “I think that the lingering effects carried forward for a few weeks before we could shake it loose. That’s something that we talked about. But it’s a new team that’s an entirely different attitude of a team so I would not expect anything but a great response. They had a really good day yesterday, one of our better Tuesdays. Really good energy.”

Cunningham started at right guard and Capps started at left guard in the season opener against Portland State but Capps injured his ankle. Stromberg and Cunningham were the right and left guard combo against Ole Miss.

Capps does more each day and it seems all three likely will shuttle against Colorado State.

“We anticipate Austin being back,” Morris says. “Ricky played really well. Really well. I anticipate that allowing us to create some depth. These guys  (the starting offensive line) are playing entirely too many snaps. You’d like to get a little bit off of them at some point during the game. With Austin being back, I think that provides those opportunities for us.”

“When you are named starter you have a different approach,” Morris says. “He's had a great approach this whole camp and into the first couple of games in preparation, but when you are named the starter and you are actively involved and part of the game plan, yeah I have seen a difference.”

How much input does Starkel have in Saturday’s game plan?